Your patient comes into the office with a complaint: “My neck bothers me. It is making me feel old.”

What do you do?

Liposuction of the neck can be used to obtain an improved neck/chin profile. This applies to patients with good skin elasticity whose primary defect is localized fat excess in the neck and submental region.

In patients with mild loose skin and not much fat, liposuction also can be used successfully.

How does that work if there is not much fat?

There are two aspects to a successful liposuction of the neck.

The first—and most obvious—is that the excess fat is mechanically suctioned and lipocytes are removed from the body.

Just as important but often overlooked by both patient and physician: In the process of removing fat with the liposuction cannula, the overlying skin is separated from the underlying muscle and superficial musculoaponeurotic system (SMAS).

Immediately following liposuction of the neck, the superficial skin is repositioned and taped snuggly.

This allows for the skin and underlying SMAS to heal with fibrotic scar tissue, resulting in a tighter neck.

Ideal candidates for neck liposuction should have sufficient skin elasticity. This allows a smooth and uniform redraping of the superficial tissues over the newly defined neck.

The ability of the skin to contract after liposuction is often remarkably good.

Even older patients may obtain significant improvement of their neck with liposuction alone.

If the patient has excessive loose skin in addition to excess fat, a facelift and/or necklift procedure may be required to achieve the best results.

In 1921, the chief of surgery at the Coucicout Hospital in Paris attempted to improve the contour of a well-known ballerina’s knees by removing excess adipose tissue.

The procedure was performed through a small incision using a uterine curette.

Unfortunately, a fulminant infection arose, and because it was before the days of antibiotics, the patient needed a lower-leg amputation.

During this procedure, fat was excised with a sharp uterine curette via a small buttonhole skin incision. Suction was not used.

In addition, many post-treatment problems ensued, such as seromas and irregular contours.

Each surgeon decided to attach a suction apparatus to their own uniquely designed curettage instruments.

He developed techniques that are recognized as the foundation of modern-day liposuction. Fournier further improved Illouz’ technique.

Most recently, liposuction and laser-based devices have been combined in the increasingly popular Smartlipo and Vaser treatments.

The patient is usually taken to an outpatient operating room.

The procedure can be performed under either local anesthesia with or without intravenous sedation, or under general anesthesia.

The type of anesthesia should be determined preoperatively by the surgeon and patient, depending upon the individual circumstances.

The procedure can be performed alone or in combination with other surgical procedures.

A tumescent technique in the neck, though not frequently used in my practice, consists of varied mixtures of 0.5% lidocaine with 1:200,000 epinephrine and hypotonic saline.

Anesthesia in the nontumescent technique is accomplished with 1% lidocaine with 1:100,000 epinephrine.

The face and neck are prepped and draped in a sterile fashion.

The patient’s neck should have been marked with a skin marker in the preop area, with the patient in a sitting position.

The areas of excess fat and skin, as well as the inferior margin of the mandible, are marked.

During the healing process, the incision should migrate into the natural crease.

A #15 blade is used to create the midline submental incision.

A small tenotomy scissors is used to create short pockets just under the skin and over the subcutaneous fat, inferiorly and laterally.

Pretunneling is done prior to active suctioning.

Without any suction, a small spatulated single lumen 2-mm, 3-mm, or 4-mm liposuction cannula is passed into the submental incision. It is used to create tunnels in a radial fashion, laterally to the sternocleidomastoid muscles and inferiorly to the thyroid cartilage.

The plane of dissection remains just under the skin and over the fat.

Once these tunnels have been created, the cannula is connected to approximately 25-mm Hg suction pressure and liposuction is begun.

Suction pressure should be off every time the cannula is removed from or inserted into the incision, so as to avoid the potential of injury to the incision site.

The lumen opening of the cannula should always be turned toward the fat/muscle and not toward the dermal surface, in order to avoid injury to the subdermal plexus and subsequent postop irregularities.

Fat is removed via the cannula throughout the pretunneled area in the same radial direction.

Care must be taken to maintain a superficial plane so as to avoid injury to blood vessels and nerves.

The end of suctioning has been reached when mostly blood and no fat is in the suction tubing.

Two additional 0.5-cm incisions are made—one behind each earlobe hidden in the infralobular crease, vertically oriented.

Again, use a small scissors to create a subdermal tunnel. The small cannula is again used to connect with the previously created tunnels.

The criss-crossing from these different directions creates a much-improved result than when compared to a decision to use only the submental incision.

A facelift/necklift may surgically correct the aged neck.

In men, a direct excision of midline fat and excess skin with a W-plasty closure will improve the neck.

The latest hot buzz at the aesthetic surgical meetings is represented by products such as Vaser Liposelection, laser lipolysis, and Smartlipo.

These devices and procedures can be used to dissolve fat cells upon contact with ultrasonic or laser-based energy.

With only local anesthetic and mild sedation, the fat is melted and then gently massaged and suctioned out via tiny cannulas.

These treatments will break down fat in precise, selective areas.

Overall, though, the future of facial plastic surgery is rapidly moving toward noninvasive treatments.

Radiofrequency-based devices, such as Velashape and Accent XL, are becoming more popular with patients who do not want surgery. These types of devices provide controlled heat therapy for noninvasive, nonablative body shaping and skin tightening.

Ultrashape is a promising device developed in Israel but not yet released in the United States.

Reportedly, it melts fat by using external high-frequency ultrasound “paddles,” in which the ultrasonic energy passes through the patient’s epidermis and dermis to rupture the underlying fat cells.

Fractionated carbon dioxide (CO2)-based lasers, such as Deep FX and Fraxel Re:pair, are proving to be effective at tightening lax skin of the neck.

In most cases, the cannula should be kept below the margin of the mandible. If suctioning is performed above the mandible, exercise great caution to avoid injury to the marginal mandibular branch of the facial nerve.

Prior to completing the procedure, the surface contour of the neck should be examined carefully. Any dimpling or asymmetries should be corrected.

Dimpling is corrected by releasing the subcutaneous residual fat attachments. Obvious platysmal bands can be plicated prior to closure.

In some cases, a chin, prejowl, or chin/prejowl implant is beneficial to redefine the chin and jawline.

If implants are necessary, I prefer using products made by Mittelman Plastic Surgery Center.

In some patients, the neck-jawline improves dramatically from using these implants alone.

The incisions are closed with 6-0 Prolene in an interrupted fashion.

Dressing the neck is very critical to the result. The entire neck should be painted with Ferndale Laboratories’ Mastisol Liquid Adhesive.

Two-inch French stretch tape is then used in an overlapping horizontal taping, taking care to pull the skin in an upward-lateral vector. The tape is left in place for 5 to 7 days.

Patients are instructed to keep their neck-chin angle as close to 90° as possible, to sleep on their back, and to remain elevated on two or three pillows.

Swelling and bruising from the procedure take approximately 2 weeks to resolve.

In some cases, edema may last longer. As the postop edema resolves, subtle surface irregularities may appear; however, they are usually short-lived and resolve spontaneously.

Short-term numbness may take a few weeks to resolve. Postop discomfort is minimal in the isolated procedure.

Patients may return to normal activities after 1 week.

Complications from neck liposuction are, fortunately, infrequent and usually minor in nature.

Infections are rare, reported in 0.15% of cases. Prophylactic antibiotics is a common practice.

Hematomas, seromas, and prolonged edema occur in less than 1% of cases.

Small hematomas or seromas respond well to needle aspiration and pressure. Permanent injuries to the marginal mandibular branch of the facial nerve or the greater auricular nerve have occurred, but they are extremely rare.

When paresis, or paralysis, does occur, it is almost always transient and resolves within weeks. 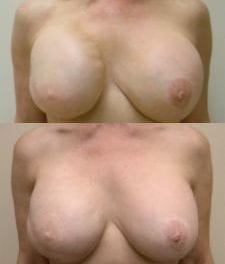 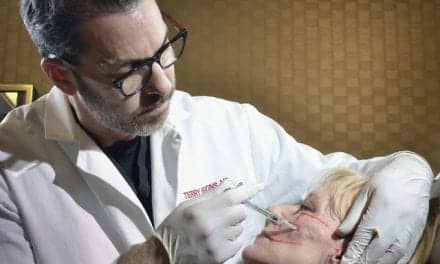