Nothing says “aging” like a neck with loose, wrinkled skin. Here’s how to attack the problem

Laxity of the neck is one of the most disconcerting conditions that patients complain about when they present for facial rejuvenation. These patients range from the 40-year-old who is just starting to show an early band to the grandmother whose grandchild grabbed a handful of skin on her neck. Regardless of age, sagging of the tissue in the submental area is a hallmark of the visual signs of aging.

Rejuvenating the neck is an essential component of any treatment plan aimed at reducing the signs of aging. As plastic surgeons, we have more options available today then ever before to help patients who complain about neck deformities. Our treatment plans may consist of correcting the neck alone or—more commonly—may be part of a comprehensive set of procedures that may include facelift, blepharoplasty, and brow lift.

Some procedures for addressing the neck are minimally invasive and may consist of only simple injections. In particular, patients with mild laxity due to early platysma bands will benefit from botulinum toxin Type A injections.

On the other end of the spectrum, some patients will require very extensive surgical procedures that address multiple tissue planes. Along this spectrum is a variety of procedures from which the surgeon can choose to achieve the best possible results.

The essential requirement for consistent neck-rejuvenation results is the diagnosis of the anatomical variants that are causing the deformity. The surgeon must have a fundamental understanding of neck anatomy to address a particular patient’s requirements.

Anatomical Considerations
During the physical examination, the following anatomical considerations are typically evaluated by the practitioner. The skin is assessed for quality and texture, and the presence of sun damage is noted. Sun damage may be a cause of frustration to both surgeon and patient, because it often produces fine wrinkles in the skin that are not readily amenable to surgery.

It is useful to note the amount of adipose tissue and its relative contribution to the apparent laxity. Typically, larger amounts of fat in the neck mean that the procedure for contouring this layer must be more aggressive.

It is also useful to assess the amount of subplatysmal fat. The presence of anterior cervical bands characteristically represents the medial borders of the platysma, and they are relevant to the choice of procedure. In addition to their presence, the position and degree of laxity of the platysma bands should be observed.

Fixed anatomic structures must be documented—they most often will limit the results. Structures such the thyroid cartilage, hyoid bone, and trachea all contribute to the appearance of the cervicomental crease. From the aesthetic plastic surgeon’s point of view, these are fixed anatomic landmarks. Their relative positions will dictate the amount of improvement that can be expected in the patient with an obtuse cervicomental angle.

Submandibular salivary glands can also contribute to the anterior cervical deformity. They may manifest as excess fullness apparent under the border of the mandible. This glandular deformity may be a result of gland hypertrophy or gland ptosis. Normal-size glands may also be apparent when the overlying soft tissues are quite thin.

Treatment of the submandibular gland is controversial. Some surgeons have advocated partial resection of the gland, whereas others have described attempts at suspending or supporting the gland to correct for ptosis.

As mentioned earlier, when the anatomic finding is mild anterior cervical banding due to early medial platysma bands, botulinum toxin injections may provide temporary alleviation. As other anatomic structures become involved and the deformity is more significant, other procedures should be considered.

Liposuction of the submental area and neck is very effective and has greatly improved treatment protocols. It can be used as an isolated neck-rejuvenation procedure. Good candidates for liposuction are patients who have excessive subcutaneous fat, good skin quality, and no platysma bands. These patients may have an obtuse cervicomental angle of varying degrees.

If the patient has poor skin quality, or if platysma bands are present, liposuction will give an inadequate result. In these cases, liposuction is an effective adjuvant treatment as part of a more comprehensive approach to the neck (Figure 1, page 26).

Maximizing Results
The platysma muscle can be described as the scaffolding that supports the superficial soft tissues of the neck. It is the key to maximizing neck-rejuvenation results. It can be approached via a submental incision or through postauricular incisions.

The submental incision permits defatting of the neck, by liposuction or with scissors. Several methods have been described for managing the platysma. Anteriorly, I prefer to incise the muscle below the level of the cervicomental angle and approximate the medial borders in the midline. Depending on the amount of laxity, I may excise redundant medial platysma prior to this.

Before suturing the medial borders, the surgeon has the opportunity to assess whether excess subplatysma fat is present. When there is a true excess, it can be trimmed to enhance the postoperative contour.

The lateral borders of the platysma provide an excellent vehicle to contour and suspend the anterior cervical soft tissue. They can be approached via a postauricular incision. I prefer to raise the lateral platysma flaps, advance them superiorly and posteriorly, and secure them to the periosteum over the mastoid with permanent braided sutures.

The superior lateral suspension of the neck relies primarily on this maneuver, rather than on tension on the skin flap. If any skin is excised, it is done to provide a tension-free closure.

A variety of suture-suspension techniques have been used through the years. I have not found it to be a useful technique as an isolated procedure, but I have used it as part of a more comprehensive approach to neck rejuvenation.

In particular, I incorporate this technique in patients who I suspect may be likely to develop early recurrence of anterior cervical laxity. These are patients who have particularly heavy necks or more than the typical amount of medial platysmal laxity.

When using this technique, I prefer a permanent monofilament suture. Following lateral platysma advancement, this suture is secured to the mastoid periosteum. It is then passed through the submental incision to be brought back and secured during surgery on the contralateral side.

A less frequently performed procedure is the anterior cervicoplasty. It entails a direct excision of skin and subcutaneous fat to correct submental laxity. It combines a Z-plasty along the medial borders of the platysma with an opposing Z-plasty in the overlying skin. Whereas it is an unusual procedure today, it does have a role in the lax necks of older male patients as well as men with extreme laxity anteriorly. Figure 2 illustrates a good result from this procedure.

Postoperative Regimen
The postoperative regimen for neck-rejuvenation patients depends on the extent of the operation and on any additional procedures that may have been performed concurrently. In general, patients are placed in a mild compressive dressing. The goal is to reduce the amount of edema and ecchymosis that may develop.

It also is beneficial to support the soft tissues as they heal in the new position. If liposuction or a neck lift is performed without an accompanying facelift, patients should keep the compressive garment on for 3 to 4 days nearly continuously. After that time, patients are advised to wear it at night for 10 to 14 days.

Patients can expect to develop edema and ecchymosis following cervical-rejuvenation procedures. They are advised that the ecchymosis typically resolves in 7 to 10 days. Much of the edema resorbs during the first 1 to 2 weeks, although it can take several months for all of it to subside.

Fortunately, complications following neck rejuvenation are unusual. They can include bleeding, hematoma, seroma, and infection. The essential management of these complications is early recognition and treatment.

Treating laxity of the anterior cervical region requires a variety of approaches. Optimal result can be achieved by pairing the procedure with the patient’s particular anatomical variant. Neck aesthetics are such an integral component of a youthful appearance that they certainly warrant our continued study.

Bernard A. Shuster, MD, FACS, is a board-certified plastic surgeon in private practice in Hollywood, Fla. He can be reached at (954) 961-5500 or [email protected] 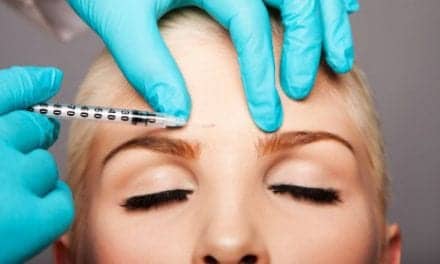 Are Two Surgeons Better than One?