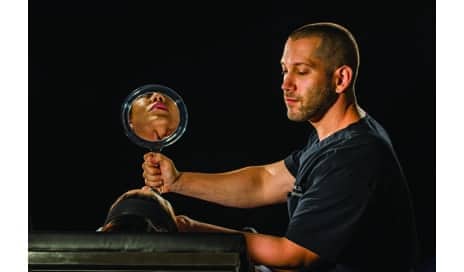 When Jason Emer, MD, left Northern California in 2014, he had your typical Hollywood hopes and dreams. He pictured his name in bright lights (only on a glam moisturizer tube instead of a marquee). Emer, a dermatologic surgeon, wasn’t looking to star on the silver screen (although we can’t rule out a role on a reality TV show). Instead, he was looking to reinvent the cosmetic surgery experience—and where better to do it than Beverly Hills, 90210.

Together with dermatologic surgeon David Amron, MD, Emer is doing just that. Both surgeons left an established and prominent practice to form The Roxbury Institute (named for the street it’s located on). Their flagship location is officially open for business, and there’s a Hollywood-style, red-carpet grand opening planned for March 2016.

Yes, there is always a demand for cosmetic surgery in Los Angeles. A survey by RealSelf has LA listed in the top 10 cities based on plastic surgery interest. That said, there is no shortage of aesthetic practitioners in this vicinity, either, and any new entity must be able to differentiate themselves from the fray.

Emer and Amron have that part covered. The Roxbury Institute will take a more holistic approach to rejuvenation. To hear Emer explain the idea, it’s not about nipping this, tucking that, or even zapping away those. Instead, it’s about big-picture total body transformation. This means head-to-toe, soup-to-nuts, and everything in-between, including regenerative medicine, nutritional therapies, bioidentical hormones, and more.

“It is a comprehensive aesthetic institute offering the best of lasers, liposuction, and anti-aging technology,” Emer says.

“Aesthetics today is one-off and commodity-based, but we are more about forming a long-term treatment plan, and this is a new way of thinking about aesthetic medicine,” Amron adds. He likens their approach to a financial plan that tells you where you are and details the steps you need to take to get to where you want to be.

“Every person who comes to see me has two patient coordinators that go through a menu of treatment options to develop a long-term plan that starts with preparing your body and skin for surgery,” Emer says.

It’s an à la carte, additive approach to aesthetic surgery based on a patient’s goals, health status, and anatomy. In general, a Roxbury-style body transformation involves two to three surgeries, scheduled about 1 to 3 months apart; a multitude of minimally invasive procedures from chemical peels to energy-based contouring; nutritional counsel; and more, with full results visible within a year.

This degree of transformation does come with a high price tag. But “the result is a body they never had and never thought they could have,” he says. “We call it a hi-def physique.”

Pre-eminent five-star treatment sweetens the pot. At The Roxbury Institute, patients are paying for the results and the white-glove service: private nurses (yes, plural), Frette sheets and robes, and gourmet cuisine in private, but exquisite accommodations.

Another part of the secret sauce at Roxbury is super-duper specialization coupled with camaraderie instead of competitiveness. The plan is to appoint directors for each discipline that falls under the 10,000-square-foot Roxbury roof: laser skin resurfacing, medical dermatology, body contouring, plastic surgery, facial plastic surgery, anti-aging, and regenerative medicine.

There will be subgroups in umbrella categories like body contouring. Amron’s focus is the treatment of lipedema, while Emer is all about high-definition body contouring. The duo plan to make the Institute an international training facility for both of these specialties, and hope to bring on a body contouring fellow.

All comers will partner in the development of the treatment plan. Think tumor board review for body transformation. In cancer care, a tumor board comprised of experts in different medical specialties will sometimes convene to review and discuss the condition and treatment options. This is the exact way that Emer and Amron will approach their patients’ care.

“Plastic surgeons lift loose skin, fix breasts, and do facelifts all at the same time that I do lasers, fillers/fat, and body sculpting,” Emer explains. “Multiple treatments address the ultimate goals of the patient.”

Specifically, Emer is known for crafting six-pack abs, tight soccer butts, and chiseled biceps with high-definition liposuction. “You can’t just do liposuction and leave,” he says. Emer’s protocol also involves massage, hyperbaric oxygen, and IV infusion of nutrients before and after surgery. “The traditional approach is to do a treatment, and if something goes wrong, you fix it. But why not prevent that seroma, hematoma, or irregular contouring before it occurs? We can do a lot to prevent any bad outcome.”

Nothing goes to waste, either. Emer will take some of that fat harvested via liposuction—and all of the growth factors, platelet-rich plasma, and stem cells it contains—and inject it back into areas of the face or body that need it most. His expertise in this area stems from treating HIV-related facial lipoatrophy with fat and soft-tissue fillers. He started a clinic for these patients in 2010 at Mount Sinai Hospital in New York, where he also served as chief dermatology resident.

He’s not done yet. Emer-style liposuction also calls upon energy-based noninvasive modalities to further improve results. “I use radiofrequency to prevent divots and tighten skin to make the end result smoother and softer,” he says. “I don’t want a lady to be able to look good in clothes, I want her to look good when she takes them off,” he says.

It’s do as I say and as I do, he adds. “Patients come to me because I am young, fit, take good care of my skin, and they feel I will understand their goals and wishes.”

It’s more than that, though. “Coupled with a friendly smile and a great personality is a quest for evidence-based knowledge,” says Joe Niamtu III, DMD, FAAC, a cosmetic facial surgeon in Midlothian, Va. “Jason is one of those people who sees something and says, ‘How can I make it better, safer, and more effective.’ ”

True to form, research and education will take center stage at Roxbury. “We are bridging a high-end private practice with academics,” Amron says. “There are many doctors in LA who use lasers, but there is no one who is running a lot of studies on the devices,” Emer adds. The clinical trials that will take place at The Roxbury Institute aim to help to develop best practices for many indications, including revision scar work and burn treatment.

Amron will be establishing a Lipedema Treatment Center of Excellence at The Roxbury Institute. This condition, which affects 17 million people in the United States, causes an abnormal accumulation of fat cells and produces a noticeably disproportionate appearance, typically in the legs and arms. Amron’s unique way of treating lipedema includes lymphatic drainage, staged compression, and hyperbaric oxygen therapy.

If You Build It, Will They Come?

Emer is one of cosmetic surgery’s new guards whose influence is measured and felt digitally. Instead of just podium time (which he gets his fair share of) and word-of-mouth buzz (which he also garners), Emer prefers to reach prospective patients via social media. “They want to feel they know and understand the doctor before coming in,” he says.

So far, the strategy is working. His videos, photos, and overall presence on Facebook, Twitter, YouTube, and Instagram have helped elevate whispers about his prowess to shouts and made him more accessible. “Anybody with a cell phone or computer can reach out to me,” he says.

Many a new patient has come to his practice in the past year—including one revision patient who was warmed by photos of Emer kissing with his dachshund, Lexie. “People want to feel they understand and know their aesthetic physician and surgeon even before they step foot in the office, and social media gives patients that connection and personal touch,” he says. “The power of social media is seen at how quickly I have built up a practice,” he says.

The best is yet to come.

There’s a product line in Roxbury’s future—so we will see Emer’s name in or at least under lights. “We are working on it,” Emer says. Expect pre, during, and postprocedural products plus nutriceuticals all bearing The Roxbury Institute name by summer 2016.

And as for the TV show, Niamtu says: “He is a great teacher and lecturer, and is on the rising end of being a household name. This is a doc that will probably have his own TV show.”