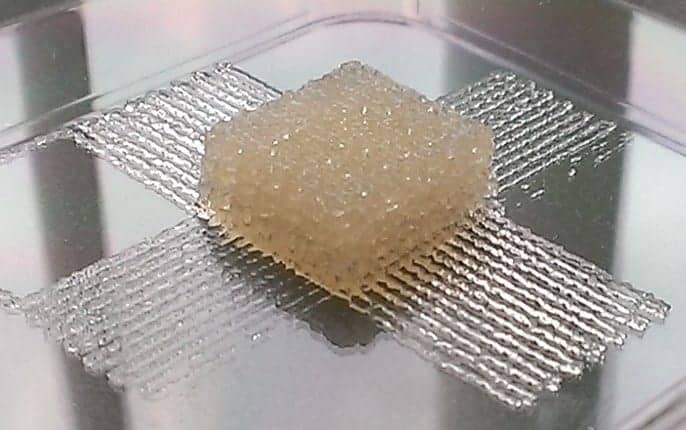 Scientists have developed a silk-based, 3D printer ink for use in biomedical implants or tissue engineering. ?
(Credit: American Chemical Society)

Advances in 3D printing have led to new ways to make bone and some other relatively simple body parts, but until now, finding an ideal bio-ink has stalled progress toward printing more complex tissues with versatile functions.

Researchers from Tufts University in Boston developed a silk-based ink that could open up new possibilities toward that goal.

Most inks currently being developed for 3D printing are made of thermoplastics, silicones, collagen, and gelatin or alginate. There are limits to how these inks can be used. For example, the temperatures, pH changes, and crosslinking methods that may be required to toughen some of these materials can damage cells or other biological components that researchers would want to add to the inks. Additives, such as cytokines and antibiotics, are useful for directing stem cell functions and controlling infections, respectively.

Researchers combined silk proteins, which are biocompatible, and glycerol, a nontoxic sugar alcohol commonly found in food and pharmaceutical products.

The resulting ink was clear, flexible, stable in water, and didn’t require any processing methods, such as high temperatures, that would limit its versatility. The novel material could potentially be used in biomedical implants and tissue engineering, the researchers report.

Are Cosmeceuticals Safe for the Skin?