Despite the dramatic increase in the number of plastic surgery procedures performed over the past decade, the median income of $270,000 reported by plastic surgeons is above the median income for all physicians, according to recent Medscape survery results. The online report was culled from data from nearly 16,000 US-based physicians across 22 specialty areas. Plastic Surgery Compensation Report: 2011 Results:

Although there is another well-regarded barometer of plastic surgery salaries and compensation, published by Medical Group Management Association, I have been told the Medscape report tends to be more realistic in some way.

Compensation for plastic surgeons remained fairly stable in 2010 compared with 2009. About two-thirds of plastic surgeons surveyed reported that their earnings from year to year were about the same or varied by less than 10% from the prior year. These data align with the trends seen in the number of cosmetic and reconstructive surgeries, which have increased dramatically since 2000 but varied by less than 10% from 2008 to 2009.

Although women are entering the medical profession in increasing numbers, men continue to be the biggest earners, in part because women are more likely to work fewer hours in exchange for family friendly schedules characterized by fewer patients per day and fewer on-call hours. Among respondents as a whole, median earnings for male doctors ($225,000) exceeded median earnings for female doctors ($160,000) by 30%. The more than $100,000 pay gap between male and female plastic surgeons was even larger — 41% — with women reporting median compensation of about $176,000 and men reporting median compensation of $300,000. 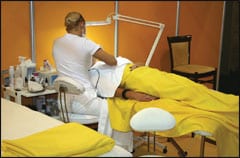