So far, they have performed the procedure on five severely disfigured patients. The new approach starts with “prefabrication” of a flap of the patient’s own skin harvested from another part of the body. The skin flap, along with its blood supply, is allowed to grow for some weeks in a pocket created under the patient’s skin of the patient’s upper chest.

Tissue expanders enlarge the skin flap over time. The team used an “overexpansion” approach to create very large flaps of relatively thin skin—ideal for use in the facial area. In some cases, when the skin flap was growing too thin, stem cells derived from the patients’ own bone marrow were used as an aid to tissue expansion, they report. Using this technique, researchers created very large skin flaps—up to 30 × 30 cm—for use in full-face resurfacing.

All five patients in the study had previously undergone facial reconstruction, but were left with severe deformity and limited facial movement. The large flap size avoided problems with a “patchwork” appearance, while the thin flap width was well-suited for reconstruction of the facial features. Multiple surgeries were needed to refine the results and to manage complications. However, all five patients eventually achieved a more normal appearance and better functioning—including improved emotional expression.

“It is a reliable and an excellent reconstructive option for massive facial skin defects,” the researchers conclude. 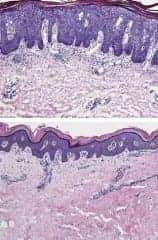