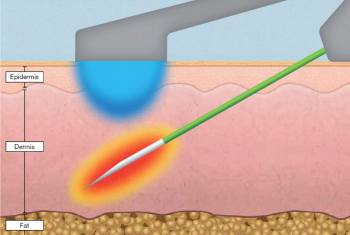 Comparing ePrime with other energy-based delivery systems. Fractionated zones of thermal injury are created in and limited to 1 mm to 2 mm into the deep dermis.

Whereas many new energy-based products in the aesthetic field tend to be adjuncts or upgrades to existing, well-established product lines, ePrime (from Syneron Candela, Irvine, Calif) is an actual unique addition.

This radiofrequency (RF)-based energy device uses “microneedling” to treat lax skin, and offers distinct differences when compared with other technologies in the field. Microneedle-based products, which can be found in use in many medical specialties, are typically the basis for drug-delivery techniques that administer medications through the skin without causing pain. This principle has been ported use with the delivery of heat to the skin for aesthetic treatments. ePrime uses a microneedle electrode array that delivers bipolar RF energy for skin-tightening procedures.

The form factor of the device’s handpiece is wand-like and uses an array of 10 32-guage needles that provide fractionated delivery of energy to the deep dermis. Each time the practitioner pulses the device, the needles penetrate the skin to deliver a prescribed amount of energy. The handpiece generates energy of 70°C for 4 seconds. As the needles deliver the energy under the skin, sensors within the electrode tips continually measure tissue temperature and impedance during treatment for optimal treatment control and effectiveness.

To get a better understanding of how the ePrime works, PSP spoke with Mitchell Chasin, MD, medical director at the Reflections Center for Skin and Body in Livingston and Bridgewater, NJ. Chasin considers the device a new volumizing technology that improves skin tone by increasing collagen and elastin production in the skin, with the benefit of toning the skin with minimal downtime.

“It’s really the first time we have been able to deliver the energy at the exact depth we want, by putting the needle into the exact layer of the skin,” Chasin says. “We are able to know exactly how much heat and how much damage we’re creating. Our end point here is the knowledge of the exact temperature inside the tissue. With other technologies, the end point is either what the patient feels, which may be pain, or it may be some redness on the surface of the skin—or it may no end point at all.”

This approach translates into more control for the physician, he adds, and that is “much more accurate and much more safe.”

Unlike other technologies that only claim to produce results at 5 or 6 months after treatment, Chasin’s patients are noticing tightening of the skin, toning of their skin, and a healthier and more youthful appearance, “and that starts to develop right around the fourth or fifth week and continues for several months,” he says. “Patients also describe it as a natural-looking result—youthful is a term they keep using.”

According to the manufacturer, ePrime treatments result in a unique healing process that demonstrates neo-collagenesis and neo-elastogenesis, which has been well-documented in scientific studies. This helps to explain the observable improvement in not only skin tone and volume but also increased skin elasticity, extensibility, and pliability, Chasin explains.

Chasin says his patients describe the results as skin having less laxity and being firmer. “The patient satisfaction with this treatment is so far in excess of most technologies out there today. It’s about 90%, which is incredibly high for an aesthetic treatment,” he says. “The key to this treatment is that we are bypassing the epidermis and are getting right down to the dermis. With most of the technologies, the energy has to go through the dermis and the capillary dermis to get to the level of the reticular dermis, which is where our target is. Using ePrime, we are starting right in that level to begin with.”

The needles enter the patient’s skin at an approximately 20° angle, which helps the practitioner visualize the treatment process.

In advance of a treatment, Chasin uses the tumescent method “because initially patients were getting significant bruising because of the needles. Some physicians were using injections of local anesthetic into the skin. We use tumescent anesthesia consisting of a modified Klein formula. The solution is made of lidocaine, saline, bicarbonate, and epinephrine. This solution provides exceptional anesthesia as well as hemostasis. A low volume is delivered slowly through a 20-gauge, 9-cm cannula using an infusion pump.

“So, now on a scale of one to 10, the patient feels zero. They feel no pain whatsoever, and there is no bleeding whatsoever. Even though we are delivering these thousands of needle insertions through the skin, they don’t have a mark on their skin when they leave and the fluid that we have instilled to get the numbing is absorbed by the body overnight. They are literally able to go back to work the next morning.”

WHO SHOULD HAVE IT?

The ideal candidate is someone who complains of looseness of the skin in the cheek area, Chasin says, or hollowing in the cheeks. “It’s really looseness and hollowing that are the main concerns, along with wrinkles and laxity. Very often, it’s someone who has nice, high cheekbones and people that are physically fit. They both tend to age in the area of the lower cheek very significantly. In that area of the face, we really haven’t had a good treatment to address those concerns. It’s not a great area to put dermal fillers, so I think it’s addressed well by [ePrime] technology.”

The ePrime treatment is safe for all skin types. With the device, “It has been postulated that you are receiving about a third of the results that a facelift can achieve,” Chasin notes. “The bottom line is that because you know the exact amount of energy that the technology is delivering, it removes the variability. You know that the results are going to be much more consistent.”

Some of the results Chasin has seen when using ePrime are very different from the kinds of results seen when using other energy-based products. “It’s unique that we are getting improvements not only in elasticity but in dermal volume,” he says.

“But these needles are insulated, and it has a cooling plate that cools the surface of the skin. So, really, I have not seen any complications at this point at all. I don’t think there have been any reports of scarring or burns.” 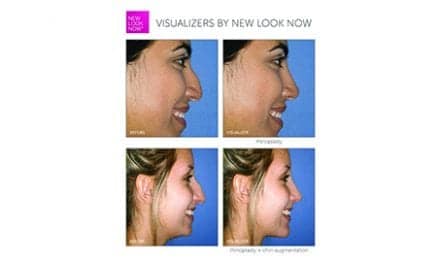 No Show, No Grow: How to Boost Key Performance Indicators 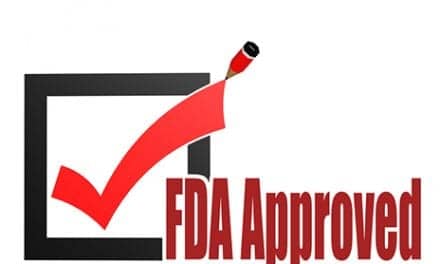 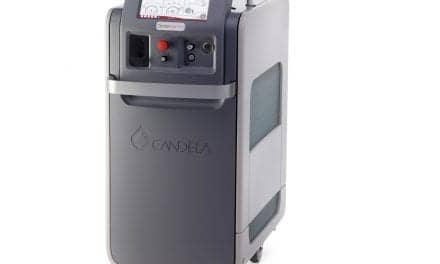